Alberta had the largest decline in economic activity in 2020 of all the provinces because of the major drop in oil demand brought on by the pandemic. As a result, Alberta saw lower oil and gas extraction and reduced resource-project related engineering construction, and its real GDP shrank by 8.2% in 2020. In 2021 high energy prices, record production levels, steady demand in construction and robust retails sales helped to strengthen economic recovery. As energy prices remain high globally, Alberta is forecast to experience robust GDP growth in the short term.

Alberta exported significantly less in 2020 than in years prior due to the COVID-19 pandemic. Exports were down roughly 22% from 2019, due to supply chain disruptions, decreased demand, and the crash in oil prices.

Exports from Alberta increased significantly in 2021. Alberta's international merchandise exports were up by 50% on an annual basis in 2021. The increase in exports was largely driven by oil and gas exports. During the first 11 months of 2021, oil and gas extraction accounted for about 75% of total exports. Out of the 20 largest export industries in Alberta, only 5 had lower year-to-date exports over the first 10 months of 2021.

Alberta's labour market was severely impacted in 2020 by the COVID-19 pandemic and collapsing oil prices. On an annual basis, the unemployment rate increased significantly (+4.4 percentage points), and was the second highest in Canada, behind only Newfoundland and Labrador, and much higher than the Canadian average of 9.5%.

In 2021, high energy prices helped to strengthen economic recovery as oil production increased to record rates. Economic recovery was also supported by increased demand in construction and robust retail sales. On an annual basis, the unemployment rate dropped by -2.7 percentage points to 8.7% in 2021. 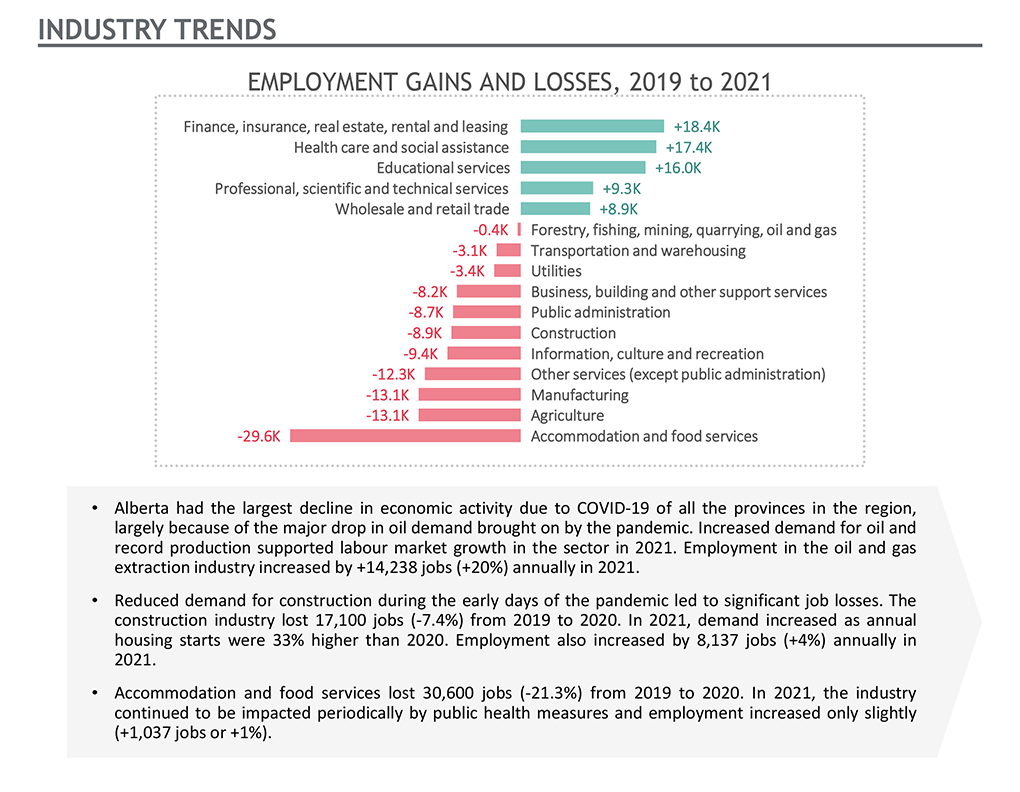 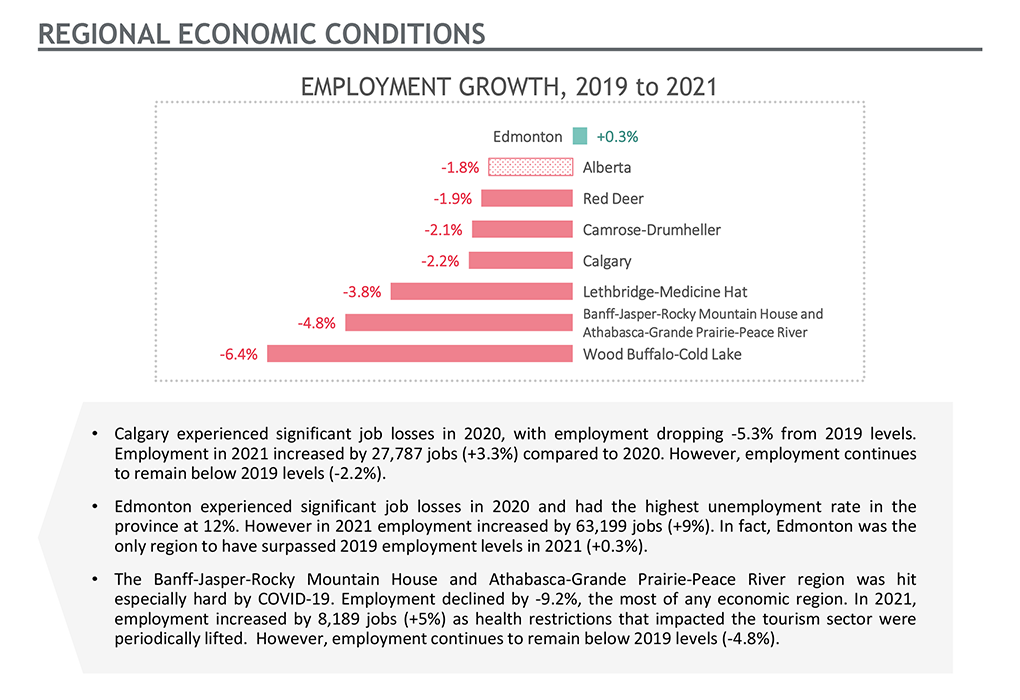 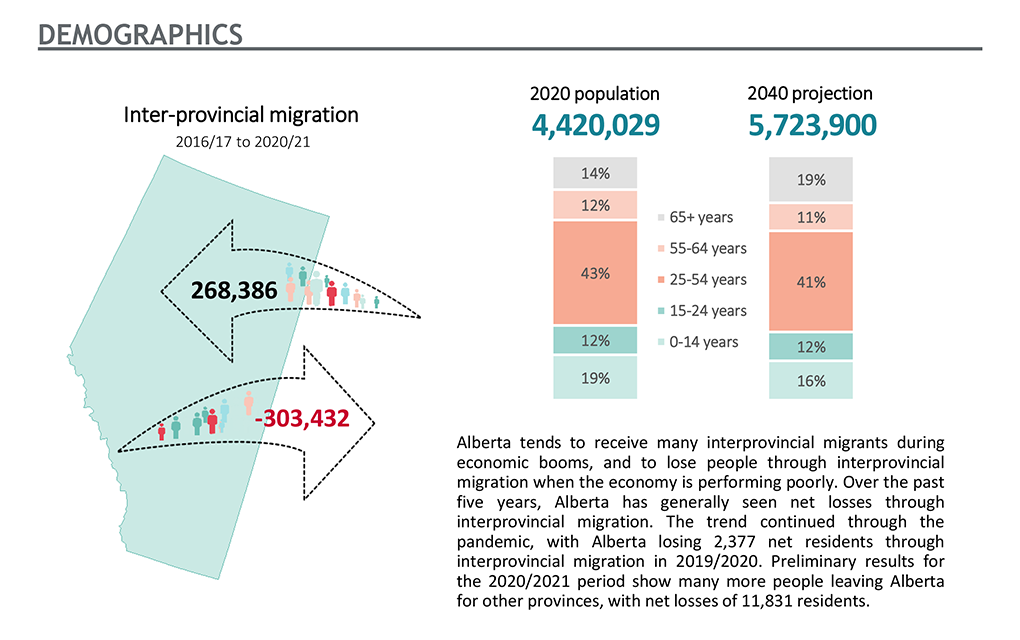 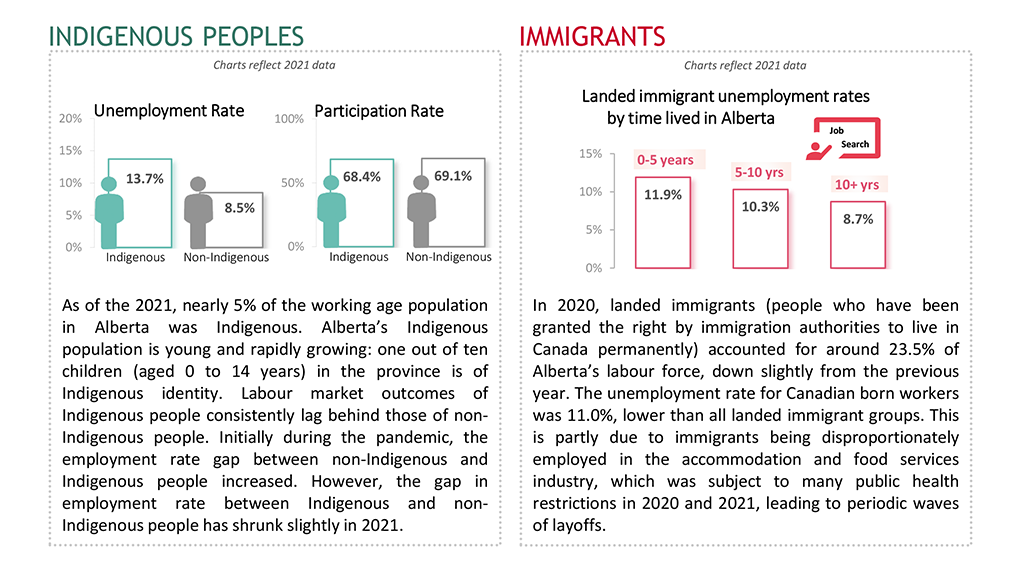 In 2020, landed immigrants (people who have been granted the right by immigration authorities to live in Canada permanently) accounted for around 23.5% of Alberta's labour force, down slightly from the previous year. The unemployment rate for Canadian born workers was 11.0%, lower than all landed immigrant groups. This is partly due to immigrants being disproportionately employed in the accommodation and food services industry, which was subject to many public health restrictions in 2020 and 2021, leading to periodic waves of layoffs. 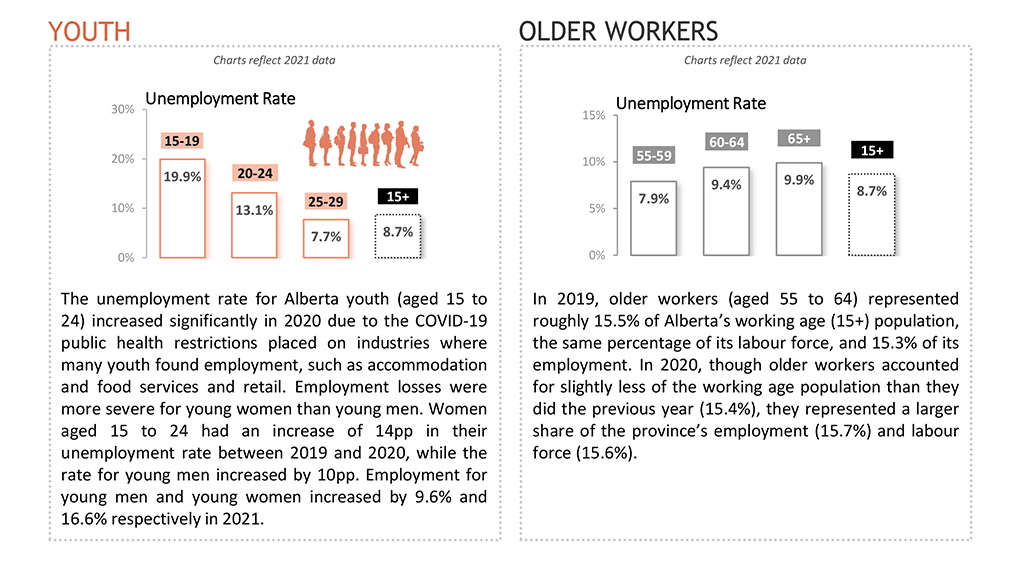 The unemployment rate for Alberta youth (aged 15 to 24) increased significantly in 2020 due to the COVID-19 public health restrictions placed on industries where many youth found employment, such as accommodation and food services and retail. Employment losses were more severe for young women than young men. Women aged 15 to 24 had an increase of 14pp in their unemployment rate between 2019 and 2020, while the rate for young men increased by 10pp. Employment for young men and young women increased by 9.6% and 16.6% respectively in 2021. 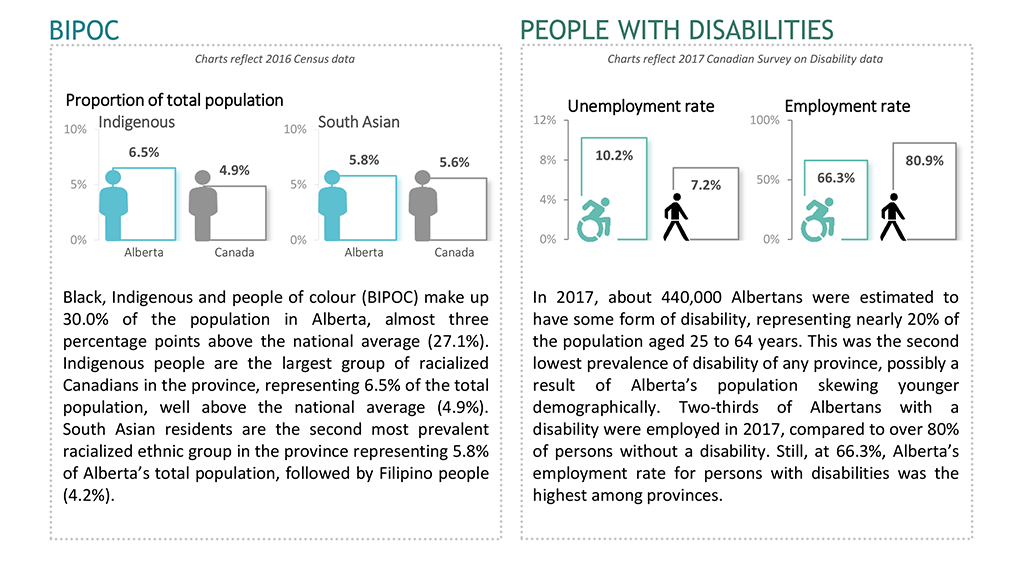 Black, Indigenous and people of colour (BIPOC) make up 30.0% of the population in Alberta, almost three percentage points above the national average (27.1%). Indigenous people are the largest group of racialized Canadians in the province, representing 6.5% of the total population, well above the national average (4.9%). South Asian residents are the second most prevalent racialized ethnic group in the province representing 5.8% of Alberta's total population, followed by Filipino people (4.2%).

In 2017, about 440,000 Albertans were estimated to have some form of disability, representing nearly 20% of the population aged 25 to 64 years. This was the second lowest prevalence of disability of any province, possibly a result of Alberta's population skewing younger demographically. Two-thirds of Albertans with a disability were employed in 2017, compared to over 80% of persons without a disability. Still, at 66.3%, Alberta's employment rate for persons with disabilities was the highest among provinces.

Report a problem or mistake on this page